Here's a peek at what's ahead.

January 8 - Comadre - Comadre - Vitriol Records
The mighty self-titled album by this long-running Bay Area band, rooted in the early emo sounds of Rites of Spring yet evolving into a dynamic rock machine. Described by BrooklynVegan as a mix of "post-punk, Murder City Devils-style punk-n-roll, and all manner of rocking"! On Vitriol Records, the label founded by Graf Orlock/Ghostlimb main man Justin Smith.

February 26 - Old Wounds - From Where We Came Is Where We'll Rest - Glory Kid Ltd.
Metallic hardcore masterpiece by some young bucks from New Jersey - this is the next generation and they're breathing new life into the crushing, exhilarating vibe wielded by Indecision, Turmoil, and Buried Alive in the 90s.

And coming up soon, so much more, including new noise from Black Market Activities, the label owned by Guy Kozowyk of The Red Chord, whose 2012 run included the year-end list-topping new album by Gaza, among others. I'm especially excited about the Stomach Earth debut on BMA - massive, creeping drum machine doom from Guy's bandmate Mike "Gunface" McKenzie!

Ghostlimb - US, Dec 29-Jan 12
Graf Orlock guitarist and Vitriol Records boss Justin Smith takes his other band on the road for a two-week tear across the USA. Bruising, vise-tight LA hardcore drenched in emotional realness and littered with esoteric historical references. Newest album Confluence is out now on Vitriol and Melotov Records.

Jar'd Loose - US, Jan 8-Jan 19
Thrashing, noise-rockin' Chicago upstarts bring their unhinged show on the road. Names like The Jesus Lizard, Motorhead and Entombed have been thrown around in reviews of the debut album, Goes to Purgatory; Terrorizer called it "one of the most exciting debuts of the year".

January 2013 also sees the end of Precious Metal, the live music series I have been running in New York since 2006. We have three shows to go! See you there, NYC.

Thanks to you all! Happy holidays!
Posted by Curran Reynolds at 2:26 PM

It's official! Steve, Ryan and I will hit the road in March for a big tour of the US and Canada, including SXSW. Black Tusk, KEN Mode, and Fight Amp support. 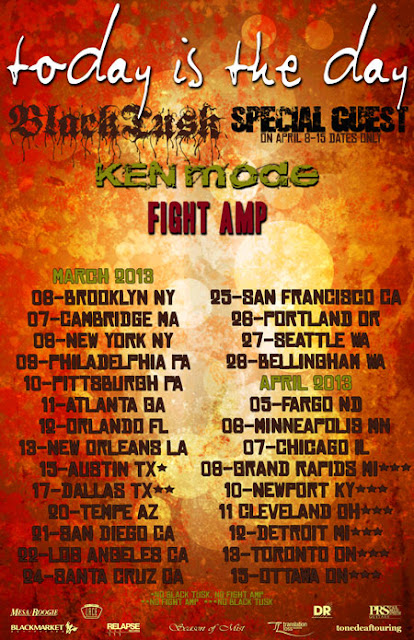 Posted by Curran Reynolds at 4:23 PM

Email ThisBlogThis!Share to TwitterShare to FacebookShare to Pinterest
Labels: TODAY IS THE DAY

GAZA at #12! "A twisting, warping spin on hardcore-infused grind n' roll with songs that hit like grenades..."
Posted by Curran Reynolds at 1:35 PM

Email ThisBlogThis!Share to TwitterShare to FacebookShare to Pinterest
Labels: GAZA

We had a good run! Monday after Monday, we brought all sorts of heaviness from across the city and around the globe (Iceland, Italy, Australia...) into the den of Downtown grime and glamour that is Lit. These forces combined and added up to something special. I like to think we played a part in the resurgence of a New York City metal scene, one which now looks stronger than ever.

• Every band that played. Every DJ. For a full list of every lineup, May 2006 through January 2013, please enjoy my complete calendar of events.

• You. The people of NYC and beyond who came to the shows and supported this thing.

We have four Precious Metal shows remaining! The first is this coming Monday, December 17, with longtime Precious Metal favorites Tiger Flowers and Meek Is Murder. January 7, we have Ghostlimb, from LA, followed by Chicago's Jar'd Loose on January 14. Our Grand Finale is January 21 -- a celebration of 6.66 years and a benefit for The South Sound, a Brooklyn music space destroyed by Hurricane Sandy.

Please come and take part in the final four shows. Spread the word. Let's end this with a bang. 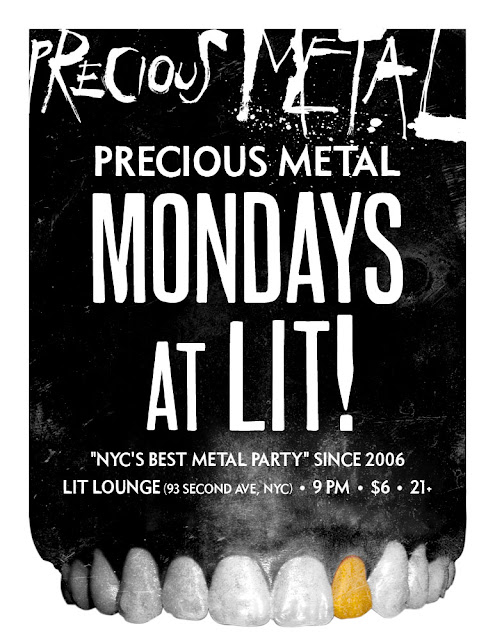 Posted by Curran Reynolds at 11:52 AM

Posted by Curran Reynolds at 5:19 PM

Email ThisBlogThis!Share to TwitterShare to FacebookShare to Pinterest
Labels: CR

I made a mixtape.

Posted by Curran Reynolds at 3:50 PM